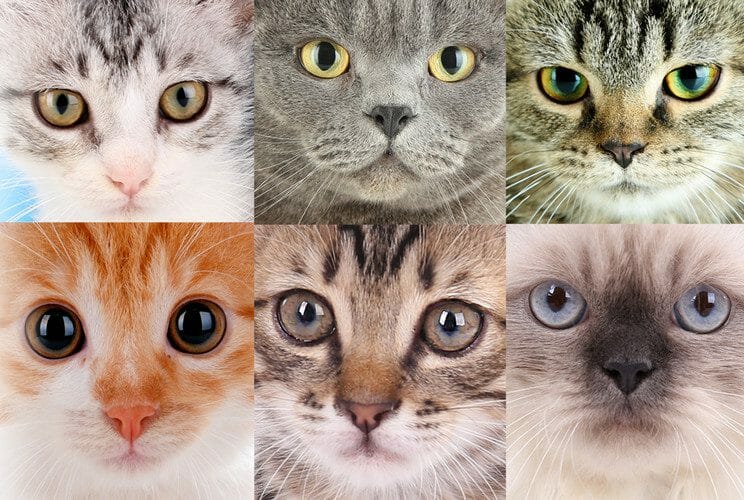 The stunningly exotic Abyssinian—with its almond-shaped eyes and large, rounded ears—was first imported from Ethiopia. However, after consulting historical documents, many suspect it was also revered in Egypt as a sacred animal.

Its short to medium coat comes in various banded patterns and colors, such as fawn, brown, or red. The alert and curious expression that often graces its face is reflective of the breed’s natural inquisitiveness. Abyssinians enjoys jumping, climbing, and exploring in every space it can. Abyssinian cats (also known as Abys) should be given new and different games to keep its mind occupied and out of trouble.

This breed needs ample attention from either its owners or a fellow playmate. These cats do well with children and other animals.

American Shorthair cats have an oval head, round eyes, pointed ears, and a large body.

The American Shorthair is known for having good health and a long life of up to 20 years.

Bred for hunting purposes in the past, American Shorthairs love to catch vermin or insects in its spare time. It has a muscular build that allows it to run fast and pounce on its prey. This breed is also very smart and does well with challenging games. Although this breed can be independent, it can be an easygoing family cat.

Buyers looking into the American Shorthair should be aware that this cat may see small animals like birds, gerbils, or hamsters as potential prey.

Birman cats are born with a fluffy, all-white coat that begins to develop colors like blue, chocolate, and red at the tips of its fur. This Birman cat breed is renowned for its bright, ocean-blue eyes and luxurious coat.

Birmans enjoy playing and socializing with humans and animals alike. However, a Birman cat has no problem relaxing and calming down when needed. Birman cats do particularly well with other animals living in the house. The Birman’s adaptable personality and sweet demeanor make it one of the most popular breeds.

The Devon Rex is uniquely described as impish and even monkey-like by some cat connoisseurs. They possess peculiar, enormous eyes and ears set apart on its face. Their facial features attribute to its other-worldly look. A Devon Rex’s fine, wavy fur comes in colors like white, grey, or brownish black. Their coat may also contain various patterns and shade variations.

Devon Rex cats are famous for being attached at the hip to their people. They are content following them around, eating with them, or simply sitting quietly nearby. The Devon Rex breed thrives on a close and intimate connection with its humans.

Although some may find their behavior to be a bit too intrusive, many owners enjoy the company. Devon Rexes do not do well without constant companionship. For this reason, the addition of another animal to the family may be a good idea to satisfy the Devon Rex’s need for social interaction.

The Maine Coon is renowned for its raggedy, disheveled coat, diverse eye coloring, and bushy tail. Its large paws allow it to easily traverse snowy environments. This makes it a popular breed in northern areas of the world. A Maine Coon’s coat comes in many colors and patterns, although brown is the most commonly seen color.

Maine Coon cats make good family pets and companions. Their intelligence coupled with their sweet personality make them a reliable breed. They are perfectly content just being in the presence of their owner. This can sometimes be a problem in that some Maine Coons will follow their people into the bathroom or shower. Unlike many of their feline counterparts, Maine Coons tend to enjoy being in and around water.

The Oriental cat breed is renowned for its slender body and long, skinny tail. Its large, broad ears also provide its distinct look.

The Oriental’s silky coat can be of short or medium length and often comes in colors like ebony, cinnamon, white, or fawn.

This breed is fiercely loyal and attached to its owners. The Oriental cats possess a vibrant, energetic personality that is great for playtime.

Although known for its longevity, many Oriental cats tend to get sick easily and are often seen wearing sweaters to make up for their thin coats.

The Persian cat, believed to come from Iran, is famous for its very poufy and long coat. Its coat can come in a diverse range of colors, including chocolate, blue, red, or white. Its flat face, small eyes, and rounded cheeks make it a lovable cat to many.

Persians have one of the most laid-back personalities, and little can disturb its tendency to lounge about the house. Although Persians do occasionally engage in play, they are most often seen relaxing on the couch or sleeping the day away on a cushion.

The Persian has a long lifespan of 15 to 20 years. Although it is healthy overall, it can struggle with lung diseases, malocclusions of the teeth, and eye problems.

Similar to the Himalayan breed in looks, Ragdoll cats are usually white or cream all over with dark pointed coloring elsewhere. Their long coats are silky and soft. They have muscular, sturdy bodies, soft facial features, and blue eyes.

The Ragdoll breed is famous for being almost dog-like. The Ragdoll is intelligent and loves learning tricks and being trained. They adore humans and will happily follow them around or cuddle with them. Ragdolls make fantastic family cats because of their docile nature.

As one of the most popular cat breeds, the Siamese cat has been used to produce other breeds, such as the Sphynx and Himalayan. The Siamese cat has a smooth and short coat that is white or cream with a dark color on its ears, tail, face, and feet. Siamese have curious, angled eyes of deep blue color and ears that appear overly big for their smaller head. Their tail is long and thin.

In terms of personality, Siamese cats love to have conversations and interact with those around them. They can be fun, playful, and inquisitive. Many Siamese owners recommend giving it another furry companion to play with and satiate its curiosity, which otherwise may get it into mischief.

The Sphynx cat is one of the only cats that never shed. This is due to its mostly hairless body, although some Sphynx cats have a soft down coat. Their hairless body usually requires weekly bathing to combat oil build-up.

This athletic breed enjoys games and plenty of attention from the humans around it. The Sphynx is a dedicated, constant companion to its humans. It is often perfectly happy with being in their presence or following them about the house. A Sphynx will become unhappy when left alone for long periods of time. This vivacious and intriguing personality of the Sphynx makes it a sought-after breed.

The top 10 most popular cat breeds are certainly a diverse group, but almost everyone can agree that they are striking and gorgeous felines. Each cat breed comes with its own needs and personalities so CatCuddles recommends researching potential breeds thoroughly before adopting or rescuing a cat to ensure they are a good fit for the household. You can learn about more cat breeds on the CatCuddles breed page.