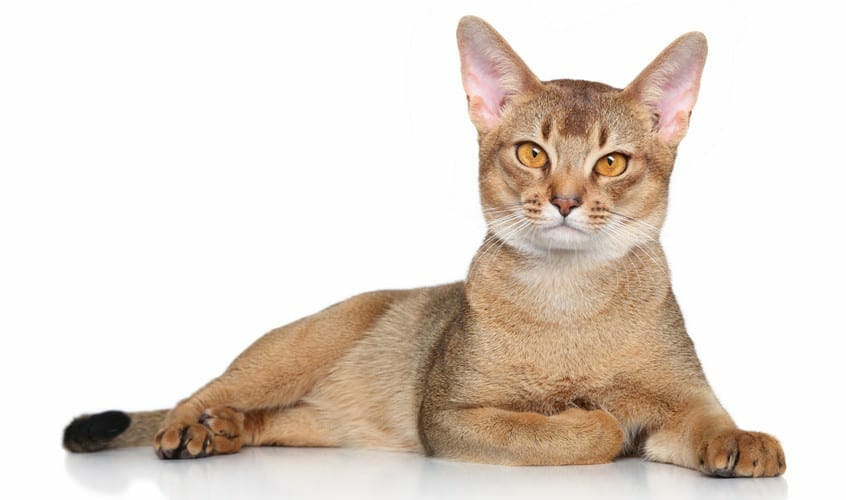 The Abyssinian cat breed is one of the most highly coveted breeds for its exotic appearance and vivacious nature. This breed is known to be an ideal companion for families and other animals, especially other Abyssinian cats or kittens. These cats are highly sociable, and adore attention from those in their family.

Also lovingly referred to as Abys, the Abyssinian breed is intensely curious and even intrusive at times. This cat loves running, climbing, and jumping in its living environment.

Abyssinians cats and kittens are avid explorers, which may often lead them to make mischief if left alone for too long. Some even label them as “Aby-grabbys” because they tend to snatch anything that piques their interest.

Overall, this breed, though independent, loves quiet time snuggling with its family and receiving affection from those it trusts. 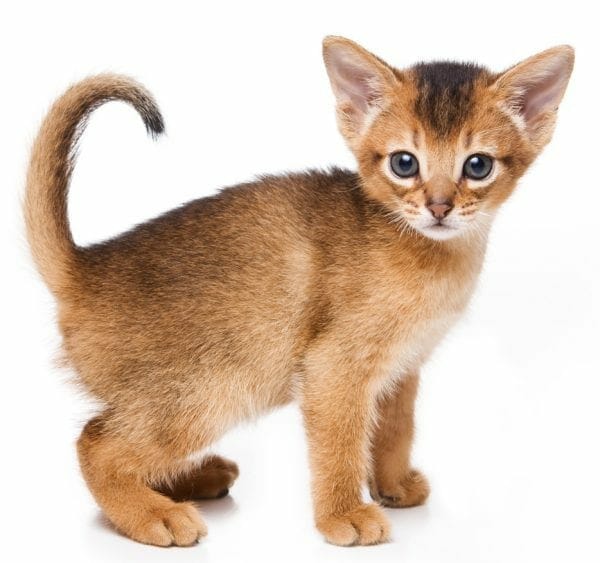 Are Abyssinian Cats Aggressive or Friendly?

The Abyssinian cat personality, without a doubt, is friendly, playful, and even funny. As was already mentioned, this intelligent feline thrives on human affection. This breed also does very well with fellow furry playmates, even dogs, ferrets, and birds.

In fact, it is highly suggested to get a fellow companion for this breed. Due to their tendency to become bored, Abys need consistent mental stimulation and distraction to keep them out of trouble.

By getting them another companion, ideally another Abyssinian cat or kitten, the cat will be kept engaged and its energy will be displaced away from things it should not be getting into.

If getting another furry playmate for this breed is not feasible, plenty of toys and puzzles should be in rotation for them.

Where Do Abyssinian Cats Come From? 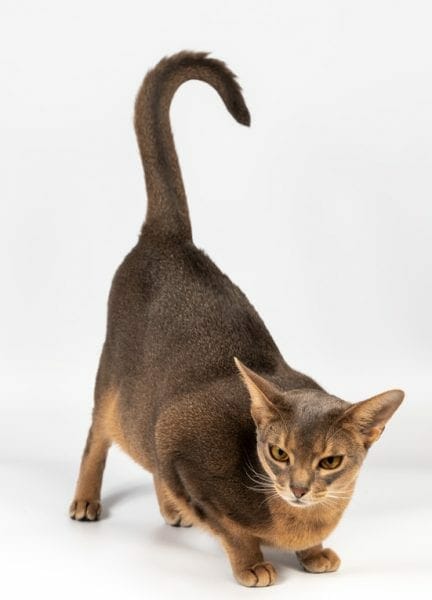 The precise origin of the Abyssinian breed is unknown. Although many Abyssinian experts claim that this cat was seen as royalty in ancient Egypt, others claim its beginnings started thousands of miles away at India’s Bay of Bengal.

However, the most popular tale of the Aby’s origin details how, following the Abyssinian War in Ethiopia with Great Britain, one of the triumphant British soldiers brought an indigenous cat from Ethiopia to England. This turned out to be the Abyssinian cat.

The best word to describe the appearance of the Abyssinian cat is exotic.

This breed possesses slanted eyes of a striking color that seems to be a mixture of gold and green. Adding to their fascinating look, this breed has wide-set, pointed ears that are quite large for its small head.

When it comes to their coat, its hair can be short to medium in length. Abyssinian cat colors can come in the colors of fawn, red, cinnamon, and blue. Although minor variations in the color of their coat exist, this breed is usually one color overall with a ticking pattern. 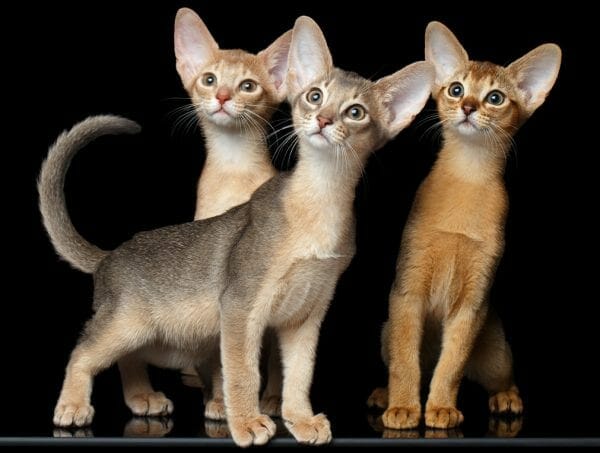 Abyssinians, with their nimble, lean body structure, are of average size compared to other similar breeds.

In terms of weight, the Abyssinian breed can weigh between 6 and 12 pounds, depending upon its sex. As for its height, most Abys are in the range of 8 to 12 inches tall. These dimensions make them medium-sized cats. 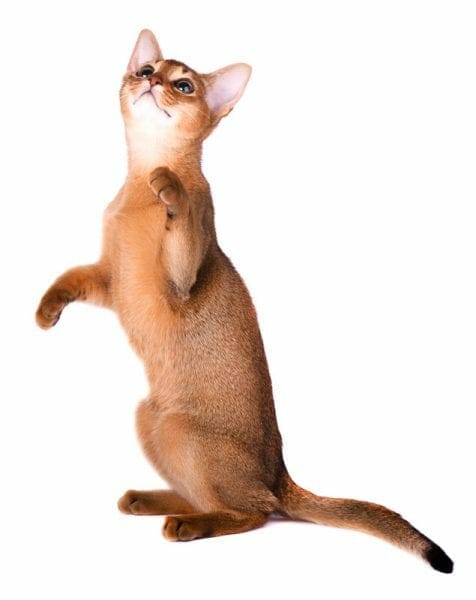 Due to the Abyssinian’s inclination to be physically and mentally active throughout the day, this breed requires an adequate diet to supplement its energy.

A diet that is rich in protein and fatty acids is recommended to keep it fueled. This will also help in keeping its coat vibrantly healthy in color and texture.

Foods such as poultry and fish are ideal ingredients to look for in canned foods, whether they be wet or dry.

Abyssinian cats and kittens have low grooming needs. Aside from a weekly brushing, this breed is low maintenance. During seasons when shedding is highest, it is recommended that this cat have baths every week or so to accelerate the shedding process and remove dead hair.

For cat lovers that suffer from intense allergic reactions to pet dander, the Abyssinian breed may be a good option to look into. For the most part, Abyssinian cats and kittens are known to be hypoallergenic for the most part.

Although no cat breed is entirely hypoallergenic, several breeds—such as the Abyssinian—produce less of the protein Fel d 1, an allergen that tends to irritate those with a propensity to get severe allergies.

For Abyssinian owners that wish to reduce allergens as much as possible, it is recommended that Abyssinians be brushed 2 to 3 times per week. When giving the cat a bath, water that is distilled and lukewarm in temperature is ideal. By simply utilizing these tips, allergy sufferers can enjoy their Abyssinian more fully. This also leaves the cat feeling loved and cared for too. 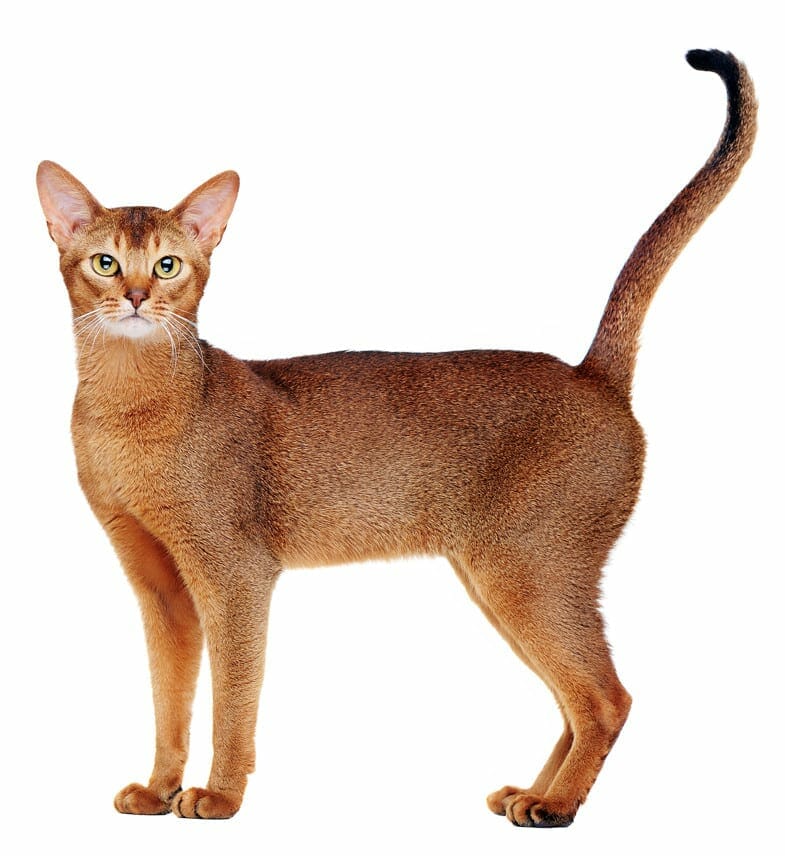 Although the Abyssinian cat tends to develop some notable medical problems, it is quite healthy overall. In terms of lifespan, this breed can live between 9 and 15 years if properly cared for.

Some of the most common health issues this breed is known for are listed below:

If any health concerns arise surrounding the Abyssinian, it is always advised to consult a certified veterinarian as soon as possible to keep the feline healthy and happy.

Interested for information about a hairless cat? Or the infamous Toyger for feline lovers who want a more wild and playful cat who literally looks like a tiger. Check out our informative article and read through cat health issues like FIV cats keeps cat owners informed about preventative measures and the proper care of their feline fur baby.