What Is a LaPerm Cat?

The LaPerm cat is an affectionate modern cat breed with a distinctive wavy coat. As the name suggests, these felines have coats that look like they are permed. This curious breed of Rexes developed through a genetic mutation that occurred in the 1980s in the United States. The breed has since found popularity in many other countries around the world. LaPerm felines are low maintenance and make fantastic companion pets that love being around their owners.

In 1982, Speedy, a brown tabby barn cat from a cherry farm in The Dalles, Oregon, gave birth to a litter of kittens. One of the kittens was bald with wide ears, and her skin had tabby markings. When her hair started growing, it was naturally curly. Her owner, Linda Koehl appropriately named her “Curly.”

Curly, a genetic throwback, was the smallest kitten in the litter. Despite this fact, Curly had a longer body and larger ears than its siblings. Curly went on to have kittens with a Manx and a Siamese tom from the local area. However, all the offspring inherited the mother’s curly coat and physique. These cats were later classified as being distinct from other curly coated or Rex breeds such as the Selkirk Rex or the Cornish Rex or Devon Rex from the United Kingdom.

In 2002, the LaPerm cat was officially named and recognized by The International Cat Association. So that genetic diversity can be maintained, the LaPerm cat breed is outcrossed with domestic longhairs and shorthairs without pedigrees. 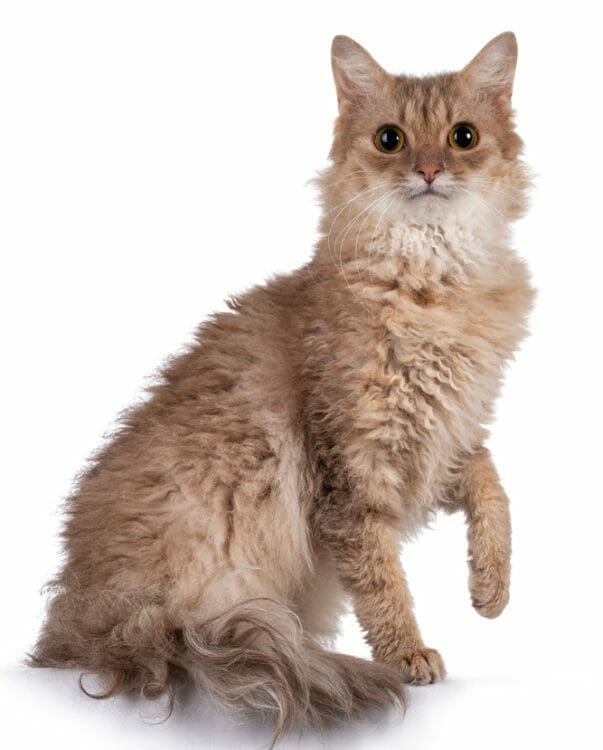 The LaPerm cat can have either short hair or long hair. It has a medium muscular build and is heavier than it appears, weighing between 5 and 8 pounds. Its neck is usually erect, and the long legs are relative in size to the rest of its body. The tapered tail will also be proportionate to the body.

A LaPerm’s head should be wedge=shaped with gentle curves. The head should be longer than its width. The ears of the LaPerm are usually large, cupped, and flared. The muzzle should be broad with a full, rounded whisker pad that has a strong whisker break. The chin should be firm, and the nose should be straight, long, and broad.

The large, almond shaped eyes that become round when alert can be of any color. There is no relationship between eye color and that of the coat.

Long-haired LaPerm cats will develop ruffs around the neck when maturity is reached. The unkempt coat has a textured and springy feel to it that is unique compared to other Rex breeds. This texture is obtained due to the variation in curl shapes and the mixing of thicker guard hairs. The tightest and longest curls are typically found on the ruff, neck, and around the ears. The fullness of the coat will vary depending on the season and the cat’s age.

Short-haired LaPerm cats do not have a ruff, the hair tends to have a crisper texture than its long-haired relatives. The springy coat stands away from the cat’s body.

Many cat lovers have allergies, and it can be difficult to find suitable pets that will not cause reactions. Most cats produce the protein Fel d 1 in their saliva. This protein is transferred to the dander and coat during grooming. Once shed, the protein can cause an immune response in sensitive humans.

LaPerm felines are regarded to be hypoallergenic for these reasons.

LaPerm cats are smart, laid back, and inquisitive felines with a good sense of humor. This makes them great family pets that are well-suited to living with other cats, friendly dogs, and young children. Any LaPerm that is brought into a home will enjoy spending time with its human family. These felines can be an affectionate cat that knows how to get attention from its owners.

These playful cats love learning new tricks and are particularly fond of heights. It is possible to teach a LaPerm how to play “fetch.” However, boredom can be an issue for the active and intelligent LaPerm, so it is important to ensure that there are always plenty of toys available along with structures to climb. 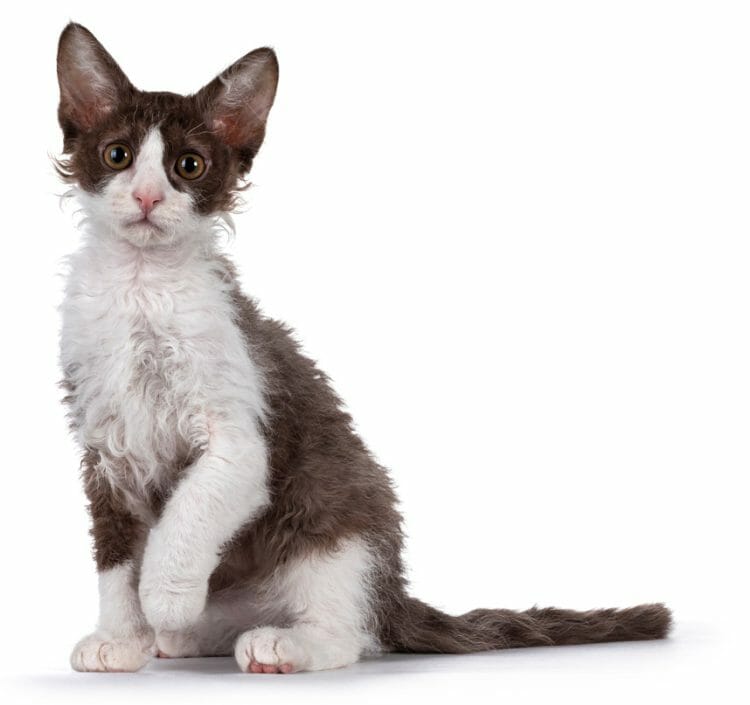 Despite the curly hair, LaPerm cats are easy to groom. A weekly combing to prevent mats and tangles is all that is needed. Although LaPerm felines do not shed much, they may occasionally have a “heavy shed.” After this, the coat often comes in thicker. Regular ear cleaning and nail trimming is also recommended, along with regular cat teeth brushing to prevent gum disease.

Generally, the LaPerm breed is healthy and has relatively few known genetic concerns. Although not common, one inherited condition that owners should be aware of is pyruvate kinase deficiency.

Because a feline’s body quickly creates additional red blood cells, anemia can be difficult to detect and may be slow to emerge. As a result, pyruvate kinase deficiency is often not diagnosed until the cat is older. Signs of anemia include lethargy and poor appetite.

Unfortunately, the only treatment for cats with pyruvate kinase deficiency is to have a bone marrow transplant. This type of procedure is quite risky and expensive.

A healthy LaPerm can expect to live anywhere from 10 to 15 years. Typically, cats that are kept indoors enjoy a longer lifespan than their outdoor counterparts. To ensure the maximum lifespan for a LaPerm, consult with a veterinarian and ensure that the cat obtains all the recommended vaccinations, such as those for rabies and distemper.

The LaPerm cat price can range from $300 to $600. Before looking for a LaPerm cat for sale, it is always advisable to check adoption centers. Often, unwanted felines find themselves in need of a new home. No kill shelters should be sought as these will ensure no healthy animal is ever put down.