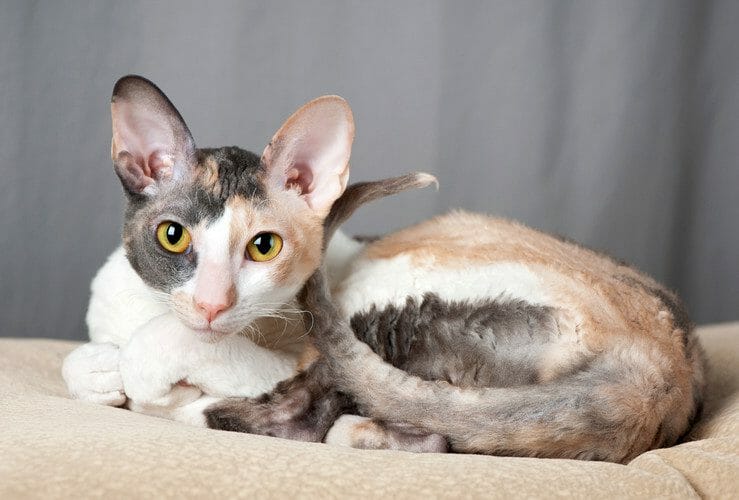 What Is a Cornish Rex Cat?

The Cornish Rex is a cat breed that originated in Cornwall in the United Kingdom (UK). With a very distinctive appearance and coat, the name comes from its resemblance to rex rabbits.

Typically, most cats have three types of hair on their bodies:

The Cornish rex cat breed is unique because they only have the undercoat, which is usually quite short, wavy, and fine.

The breed was established as the result of a genetic mutation. The mutation made its first appearance in a litter of kittens born on a Cornish farm in the 1950s. Owned by Nina Ennismore and Winifred Macaliste, Kallibunker (the first of the breed) was later backcrossed with his mother to produce two additional Cornish Rex kittens.

The male kitten was named Poldhu and sired a daughter named Lamorna Cove. Lamorna was taken to the United States where she was bred with a Siamese cat. This led to the breed developing large ears and long whip-like tails.

Cornish Rex cats are not just comical in their appearance, they also have a great sense of humor. A highly intelligent cat that takes considerable interest in what its owner does, the Cornish Rex likes to find the highest vantage point in the home to survey its surroundings. These quick learners are forever on the go, so they are not suited for anyone looking for a lap cat.

Another thing that many people ask is “are Cornish Rex cats normally vocal?” The answer is yes. Although cats only meow to capture the attention of their human owners, the Cornish Rex has effective communication down to a tee.

The Cornish Rex is the perfect choice for families with young children and other pets as their friendly, outgoing, and sociable nature stands out in comparison to many other cat breeds. However, it is important to keep a Cornish Rex occupied to prevent unwanted behavior. Invest in puzzle toys that provide kibble as a reward as this will be a good source of stimulation for the cat. 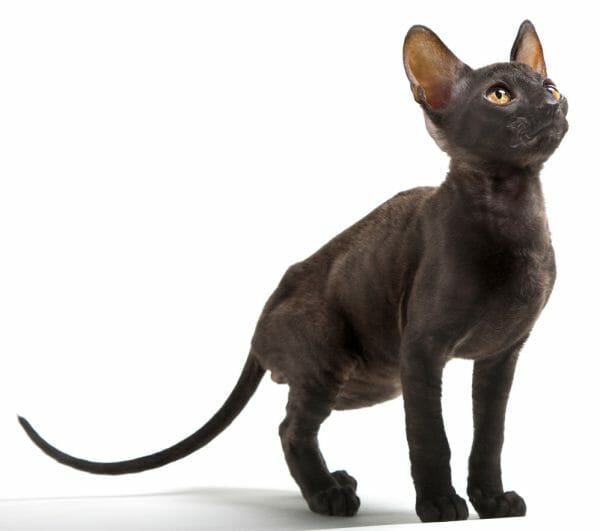 Weighing between 5 and 10 pounds, these elegant looking, medium-sized cats have slender legs, and appear as though they are standing on tiptoes. Other distinctive features of this breed include:

A Cornish Rex’s fine, wavy hair can be solid in color or patterned. Solid colors can be black, blue, lilac, brown, chocolate, red, and cream—making for a wide array of options. Any of the following patterns can be found:

These felines love company and have a tendency to get bored easily. Therefore, it is important to not leave this breed alone for prolonged periods. If nobody is going to be home all the time, it is advisable to provide a companion cat or dog for these felines. 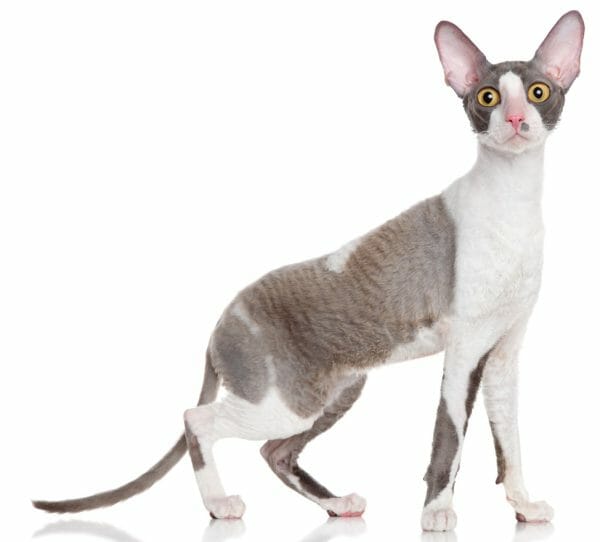 Many allergy sufferers that want to own a cat will often look to hairless cats and short-haired felines (such as the Cornish Rex) in the hope that they are hypoallergenic. So, can people with cat allergies own Cornish Rex cats?

Allergies are the result of a glycoprotein that is secreted in a cat’s saliva and urine. When people are allergic, they are usually reacting to the presence of this protein in the cat’s dander. That said, Cornish Rex cat allergies are less common.

Before adopting a Cornish Rex, it is suggested that potential owners spend some time around the feline to learn their personal allergy tolerance.

When comparing the Sphynx cat vs Cornish Rex, there are few differences. Both cats are similar in appearance, size, weight, have an identical life expectancy, and give birth to the same sized litters. The major difference between the two is that the Sphynx is completely hairless while the Cornish Rex has a soft downy undercoat. 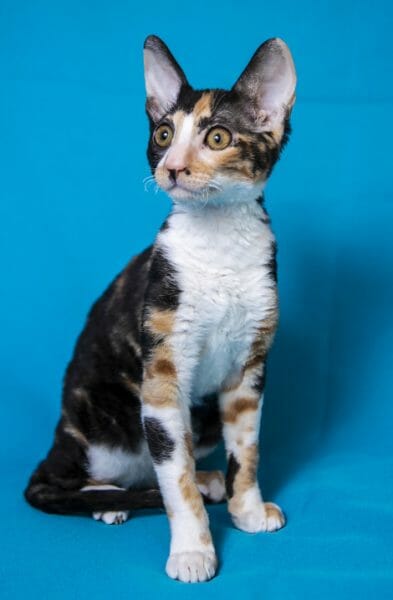 Just like any other feline breed, these felines can develop health issues. Although relatively healthy overall, common concerns for the breed include luxating patellas and hypertrophic cardiomyopathy (HCM).

A luxating patella occurs when a cat’s knee joint does not function properly. The patella (or kneecap) is meant to sit in the groove of the femur. When the patella slides out of this groove, it can cause a cat pain and discomfort as well as affecting its ability to walk or jump.

Luxating patellas are congenital in many breeds, including the Cornish Rex. Treatment will vary depending on the severity, and options may include the use of anti-inflammatory drugs, relaxation, or surgery.

Hypertrophic cardiomyopathy is a type of heart disease in which the wall of a feline’s heart thickens. This causes inefficiencies in the heart’s ability to pump blood around the body. As a result, heart rate and oxygen usage will increase as the heart’s muscles become oxygen starved. Cornish Rexes should be screened for HCM by a veterinarian.

Due to their short hair, sunburn can be an issue for a Cornish Rex. Keeping them indoors, particularly on sunny days, will help prevent this issue.

The average lifespan of  these felines is between 9 and 13 years. For a long and healthy life, owners should ensure these felines are not overfed, have a balanced diet, and are allowed plenty of exercise. In addition, owners should bring their feline to the vet for regular check-ups and ensure they have received core vaccinations for diseases such as feline panleukopenia and feline immunodeficiency virus (FIV).

Where to Find A Cornish Rex Cat

Although an online search will always reveal plenty of places that will offer these felines for sale, all too often these animals make their way into animal shelters. There are always going to be cats that need a good home. Therefore, try to find a Cornish Rex cat rescue that will have these felines available for adoption or adopt from a no-kill shelter that does not euthanize healthy animals.