According to the panleukopenia definition, feline panleukopenia obliterates the efficacy of white blood cells in the body. This, in turn, destabilizes the normal functioning of the immune system. Because the feline is internally unable to fight off germs it comes into contact with, it is extremely vulnerable to every contagious disease or infection it may be exposed to.

Kittens about 3 to 5 months old are especially susceptible to feline panleukopenia. Pregnant and unvaccinated cats share in this susceptibility.

Feline panleukopenia, which also goes by the terms of feline parvovirus (parvo) and feline distemper, is a disease that should not be toyed with or ignored. In a matter of days following incubation of the infection, a cat could succumb to feline panleukopenia. If some of the common symptoms of distemper are observed, the cat should be rushed to the vet or animal hospital as soon as possible.

Symptoms of Parvovirus in Cats

The onset of distemper in cats is usually sudden. If these symptoms are occurring, it is always recommended a vet be seen to determine with certainty if parvo is the underlying cause or not.

How Can Cats Contract Feline Panleukopenia? 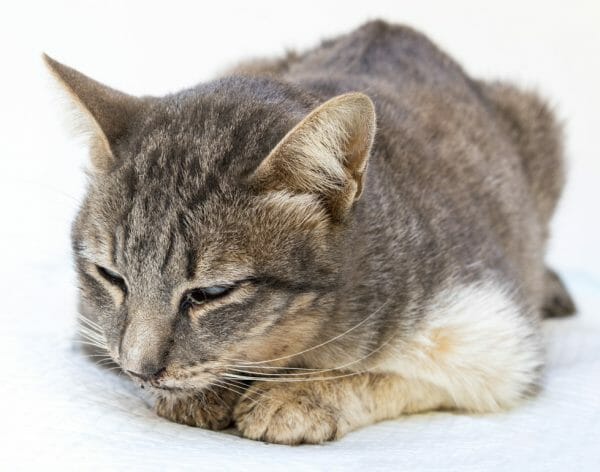 Cats, but more often kittens, can contract feline panleukopenia (parvo) through a number of outlets. The first and foremost mode of entry seen is through oral contact with animals that carry the virus. Exposure to substances that have a concentrated amount of the panleukopenia virus attached to it is another common way that felines catch parvo.

In realizing that bleach is the only known killer of the viral infection that is parvo, owners realize how resilient feline panleukopenia is. Possessing an incredibly long life cycle for a virus, feline panleukopenia (parvo) can remain on articles of clothing or other surfaces for up several years.

Any time that a feline comes into contact with the distemper through one of these means, it more often than not will contract the panleukopenia virus. Between contraction of parvo and the showcasing of typical symptoms of it, an incubation period of 2 to 5 days may be seen.

At the first sight of symptoms, time should not be wasted in getting the cat to the vet. It is an important reminder that unvaccinated kittens are the most likely victims of feline panleukopenia.

Can an Indoor Cat Get Distemper?

There is a common misconception that exists amongst pet owners regarding how vaccinations relate to whether an animal lives primarily indoors or outdoors. Some believe that just because an animal spends its entire life indoors, it is immune to infection and disease that could be picked up outside. This is false.

Although an indoor cat may be better taken care of and live longer because of this, this does not necessarily mean that they are immune to a virus like distemper. As mentioned previously, distemper can be strongly attached to things like the dirt that shoes bring into a house or other similar surfaces.

Because of this, indoor cats should not be exempt from receiving vaccinations against diseases such as feline panleukopenia (distemper). Outdoor cats may have a much higher chance of catching it, but this does not invalidate the fact indoor cats can get it as well. Whether a pet lives indoors or outdoors, a good owner will vaccinate the feline no matter what.

Can a Vaccinated Cat Get Parvo?

Although the chances of a parvo diagnosis in a vaccinated cat are very slim, a minute possibility does exist. Depending upon the kitten’s vet, a feline panleukopenia vaccine schedule will be assigned to the kitten shortly after birth. Similar to human babies, kittens that are unvaccinated are at high risk for contracting a potentially deadly disease. Because of this, vaccinations are administered soon after birth.

In most ordinary situations, a kitten will begin receiving vaccinations for diseases at about 6 weeks old. This will usually continue on until about 16 weeks of age, but it may be prolonged if the vet sees fit to do so.

During the kitten’s rounds of vaccines during the first several weeks of life, owners are cautioned that contraction of a disease is still possible. It is not until the kitten has completed its vaccine schedule that it is considered fully vaccinated and safe. Any questions about vaccinations should be brought to the feline’s primary veterinarian.

How to Prevent Feline Panleukopenia in Cats

When it comes to a virus that is as strong and vicious as the feline parvovirus, there is not many effective prevention methods that can be used. However, the most effective, potent prevention method are that vaccines are received in full. Kittens should be receiving them in the few months following birth. It may not provide 100% protection from the panleukopenia virus, but it is the best guard against it that exists today.

How to Cure Parvo in Cats

A feline panleukopenia definition tends to include one piece of information that is initially startling to cat owners: there is no known, distinct cure for it. The symptoms rather than the panleukopenia virus itself is treated. If parvo in a cat is believed to be present, the feline should be immediately evaluated by a vet to begin treatment if necessary. Cases of feline panleukopenia that are left untreated possess a mortality rate of over 90%.

Cats in utero and those less than 8 weeks of age are given a feline panleukopenia prognosis that is poor at best. This statistic alone should be enough of an incentive to bring the cat to a vet for an examination if the potential for the parvovirus is there.

In treatment, the feline will be under close observation by the vet. Antibiotics and fluids will likely be given to ward off any other potential disease and combat the acute dehydration. Additional treatment methods may be employed if the situation worsens.

In any case, felines diagnosed with feline panleukopenia that survive past the 5-day mark under the care of a vet are frequently found to live and slowly recover strength.