Can Cats Get Rabies?

Although more generally associated with dogs, rabies in cats is quite common. This is because a greater number of cats are kept as pets in the United States compared to dogs. Rabies is a viral infection that affects the nervous system of the cat, which includes its spinal cord and brain. If rabies is left untreated, it can be fatal.

Fortunately, thanks to the rabies vaccine for cats, the infection is quite rare and can easily be prevented. Unfortunately, the virus is untreatable once a cat has it, meaning it is essential for all owners to have their pets vaccinated and keep up to date with all booster shots.

For the next one to seven days, the cat will enter the excitative or furious stage. Symptoms during this stage include:

During this phase, any caged cats will be likely to attack the bars of the cage. It is during this stage that a rabid cat will be at its most dangerous to people. Signs of rabies in a cat’s eyes may become more obvious as they will widen in the furious stage.

Finally, the cat will enter the paralytic phase. This will last for the final two days of the cat’s life. During this stage, weakness or complete paralysis will set in, and the cat will be unable to swallow.

How Is Rabies Diagnosed in Cats?

Rabies is not a virus that can be easily diagnosed. Although it is possible to observe all of the symptoms, it is not something that a cat can be tested for until after they have died. The brain tissue of the cat will need to be analyzed to confirm whether a feline had rabies.

If a cat has been bitten, rabies should be a concern for its owners. In these cases, owners should take the cat to a vet and have it vaccinated immediately. If the cat rabies vaccine is administered promptly after a feline is bitten, it may be possible to prevent it from contracting rabies.

If a vet suspects that a cat has already developed rabies, humane euthanasia will be suggested as the safest course of action. The local health department will also need to be informed of the infection.

How Is Rabies Transmitted to Cats?

The rabies virus can be spread through all types of mammals. Usually, rabies is transmitted to a cat if it is bitten by an infected animal. Many wild animals such as foxes, bats, and raccoons are carriers of the rabies virus.

If a cat has been found playing with a dead bat or other animal, it is important that a vet is consulted as there is a potential risk of infection. In addition to being bitten, the rabies virus can also be transmitted through the saliva of an infected mammal.

Once saliva has left the cat’s body, rabies can survive for up to two hours. This means that a cat who comes into contact with the saliva could contract the virus through an open wound. Although transmission through a cat scratch is rare, it is possible because cats tend to frequently lick their paws.

The rabies virus will start affecting the area close to the bite before making its way through the body and to the brain. Once the virus reaches the brain, symptoms will start to show, and the cat may only have seven days left to live.

How Is Rabies Treated in Cats?

Although there is no actual treatment for rabies, if the wound is disinfected immediately after a feline is bitten, it may be possible to decrease the chances of infection. However, it is important that owners do not attempt to disinfect the wound themselves as there is a high risk of the infection spreading to humans. Instead, take the affected feline to a veterinarian immediately.

A vet may provide a booster to a pre-vaccinated cat, and the feline may need to be quarantined for a period. However, quarantine regulations differ between states. When quarantined, it is important that the cat does not have contact with any other animals or children. If there is a chance that the infection has spread, humane euthanasia will be the only option.

Most states specifically require owners to ensure their cat is vaccinated against rabies. Therefore, it is important for all owners to get the rabies vaccine for cats and keep up with all ongoing boosters as required by state regulations.

Generally, the first dose of the rabies vaccine for cats will be administered within two to three months of a kitten being born. The minimum age for vaccination of a cat will vary depending on the state, so always check with a local vet.

So, how often do cats get rabies shots? This will vary depending upon the type of vaccine that was originally administered and the regulations of each state. Typically, cats will need to have boosters every one to three years. 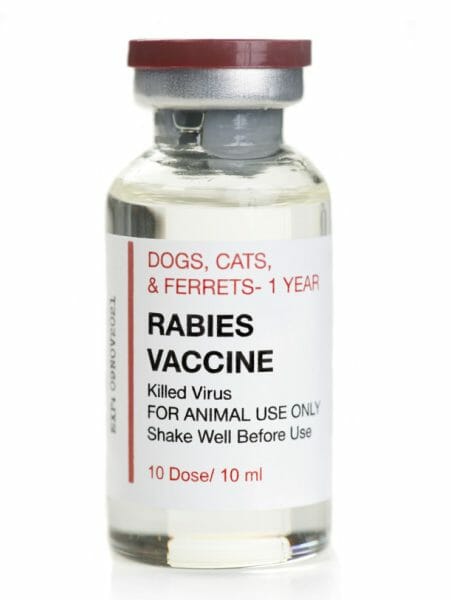 Do Stray Cats Have Rabies?

It is difficult to know whether a stray feline was vaccinated for rabies. Therefore, it is important to treat all stray animals with a degree of caution and avoid getting close enough for a cat to bite or scratch. In addition, do not bring stray animals into the home until they have been checked over and vaccinated by a vet.

It is possible for a feral cat with rabies to spread the infection to a domesticated animal. To help prevent this, owners should prevent contact with strays, which includes having cats neutered or spayed and keeping pets indoors wherever possible.