What Is a Havana Brown Cat?

Solid chocolate coats are rarely found on felines. For this reason, the Havana Brown cat was developed specifically to create this look. Although not a common breed, numbers have slowly increased in recent years. There are only 1,000 of these felines believed to exist worldwide. The Havana Brown stems from the Siamese cat, and considerable breeding efforts have been carried out to create its distinctive look. Havana Browns are the only cats that have brown whiskers. 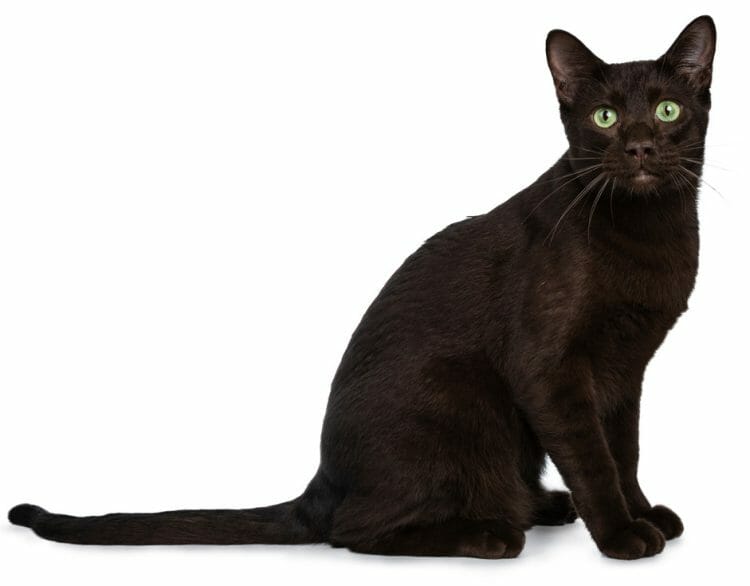 The Havana Brown cat was developed in England during the early 1950s. The breed was established by a group of cat fanciers that was initially called “The Havana Group” before later becoming known as “The Chestnut Brown Group.” Their aim was to create a self-brown (solid-colored) cat.

Using selective breeding with a Siamese and domestic black cat that both carried a chocolate gene, chestnut-colored kittens were produced. It is also believed that a Russian Blue was also used early on.  However, no genetic traces from this breed are left within the Havana Brown.

Early in the breed’s development in the United Kingdom (UK), the breed was given the name “Chestnut Brown Oriental,” and the cats retained the Siamese appearance. Around this point, two early kittens were exported to the United States. From here, the breed’s future took two separate paths.

Throughout the years that followed, the UK version of the breed encountered a series of genetic issues. As a result, other breeds needed to be introduced to the breeding program. This outcrossing meant that the initial intended look could no longer be achieved. These problems caused rifts between the breeders, along with issues progressing the breed with the Governing Council of the Cat Fancy (GCCF). As a result, the Chestnut Brown Oriental was no longer available in just one color. It soon became known just as the “Oriental,” and a numeric system was used to designate the color. 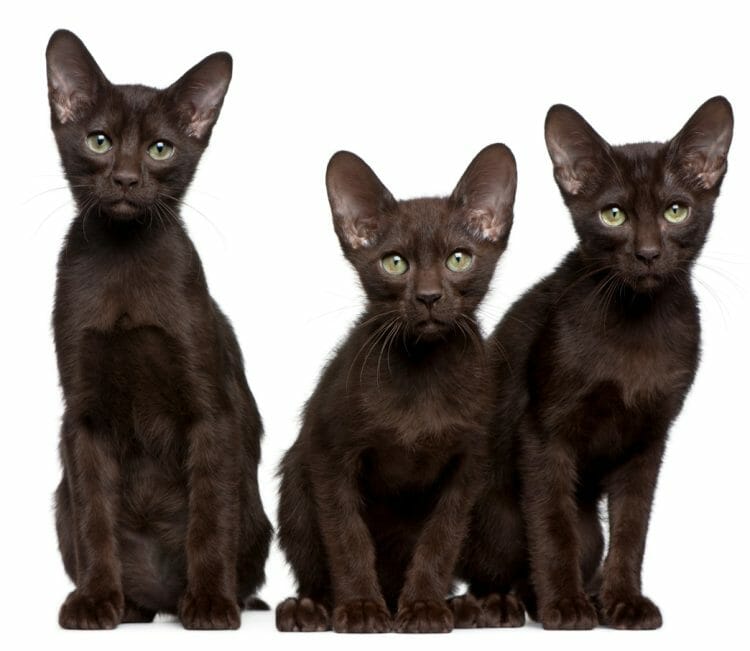 Meanwhile, in the United States, the two imported kittens were crossed with Seal Point and Chocolate Siamese cats, meaning it became easier to refine the breed’s colors. Breeders were able to resolve many of the defects found in the British cats by promoting genetic diversity. This resulted in the American cats differing in appearance from their UK counterparts.

By 1964, the Havana Brown would be accepted for Championship status with The Cat Fanciers’ Association.

In the early 2000s, English breeders again tried to achieve the goals of the initial Havana breeders. This time they were more successful. In 2014, the GCCF recognized the new attempts under the name “Suffolk.” However, the GCCF needed an alternative name as they had used the term “Havana” in relation to self-chocolate Oriental Shorthairs. Although Havana Browns are used in the Suffolk breeding program, the latter bears closer links to the Chestnut. Because the breeding pool for Havana Browns is quite small, it is regarded as an endangered breed. 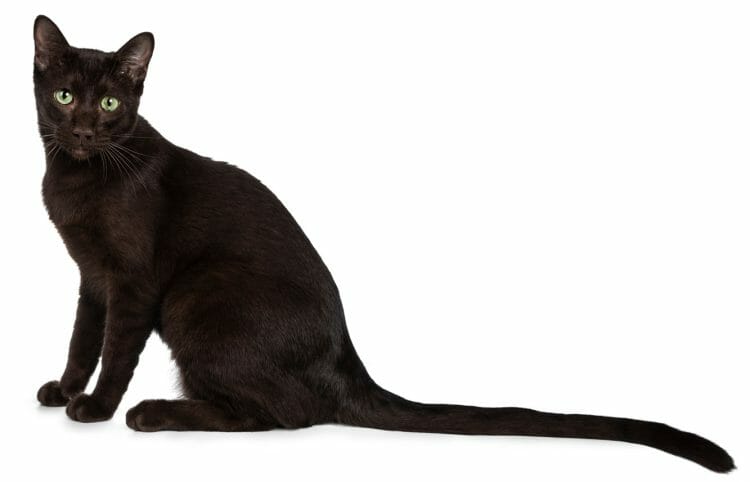 The Havana Brown cat breed is noted for its intelligence and affectionate nature. Unlike the Siamese cats they are descended from, the Havana Brown is quiet. Agreeable and able to adjust well to new situations, Havana Browns thrive when there are humans to interact with.

Around the home, these cats enjoy getting involved in anything that is going on and will often seek out attention. This breed enjoys playing and can be taught to fetch. They are well-known for picking up objects and moving them around the home.

Havana Browns are medium-sized cats. Their triangular head is unique in its appearance, as the chin is not square and is instead developed. The look this achieves resembles a corn cob. Their clear, bright green eyes are medium in size.

The glossy, smooth coat is typically short to medium length and will always be a rich mahogany color that is specific to the breed. Adult Havana Brown cats weigh between 6 to 10 pounds and are 12 to 15 inches long.

A typical Havana Brown lifespan is between 10 to 15 years. Regular visits to the vet and recommended vaccines (such as those for distemper and rabies) should be provided to keep these felines healthy. In addition, regular teeth brushing will help to prevent gum disease. Preventive medication for heartworms, fleas, and ticks is also recommended.

Regardless of the pedigree of a cat, owners should always be mindful of health concerns that may arise. Fortunately, Havana Browns are not known to have many predispositions to genetic health problems.

In some cases, Havana Brown kittens may be prone to developing upper respiratory infections (URIs). This type of infection may cause a cat to sneeze, develop a fever, or have a runny nose. URIs are usually spread between felines that are kept in close quarters with other infected animals. Infections can be either viral or bacterial. A healthy cat will have no problem overcoming this type of infection, and symptoms will usually ease after a week. That said, it is always best to seek veterinary assistance. In cases where the cat has a weakened immune system, veterinary care will be essential and prescribed antibiotics may be required. 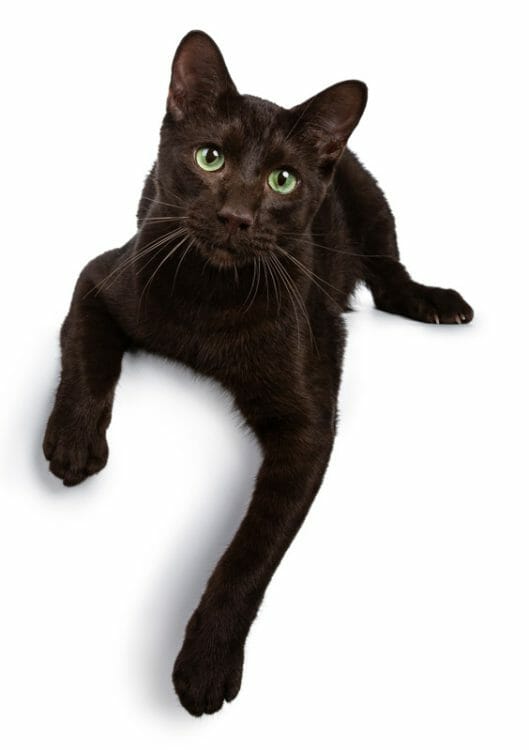 Calcium oxalate stones can also be a problem for the Havana Brown. These crystals can build up in the bladder or urinary tract to form stones. Symptoms include

Felines that are particularly at a higher risk of developing bladder stones include males, middle-aged and senior cats, and those that are obese.

Bladder stones will usually need to be surgically removed in a procedure called a cystotomy. A prescription diet with reduced calcium and oxalate can help occurrences of these stones.

Although this breed is rare, it is always better to adopt a cat rather than buy one. Many cats end up in rehoming shelters and rescuing them ensures they go to a new loving home. When looking for a Havana Brown cat rescue center, always make sure the shelter has a no-kill policy. Centers like these promise that no healthy animals are ever euthanized.