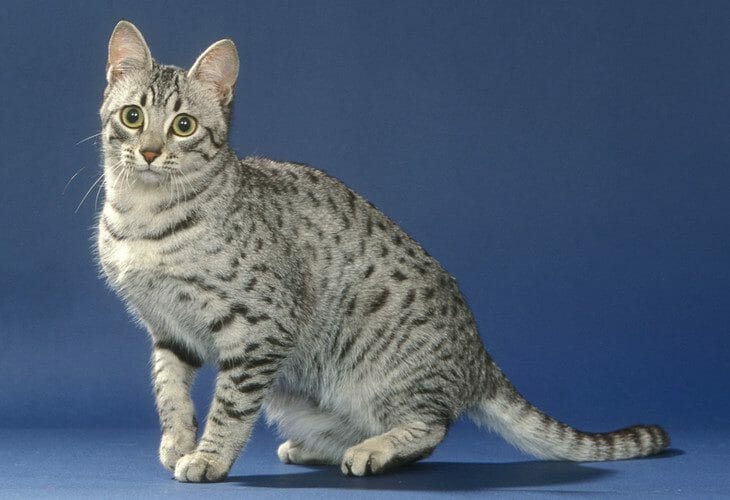 Evidence from feline genome data suggests that the Egyptian Mau cat is closely related to the Western Korat, American Turkish Angoras, and the Maine Coon breeds. As the name suggests, the breed originates from Egypt. The word “Mau” is Egyptian for “cat.”

Archeologists have found examples of 3,000-year-old Egyptian art depicting cats that look remarkably like the Mau. One such work of art can be seen in the Book of the Dead. The book features Ra, the Sun God, as a spotted tabby, much like the Mau.

In ancient Egypt, cats were worshiped. The Mau has a scarab mark on its forehead, not unlike many of the cats depicted in art from the time. It is believed that the scarab was of great significance to the ancient Egyptians. However, this mark is common across many tabbies, and the truth is that this breed was not developed until after World War II.

Establishment of the Breed

In 1953, the exiled Russian Princess, Nathalie Troubetzkoy, took an Egyptian tabby back with her from Egypt to Italy. With the assistance of the Syrian Ambassador, this cat was then bred with another Egyptian cat. The resulting kittens were taken to the United States in 1956, and the Egyptian Mau breed was established.

There were also further contributions made to the breed in the 1980s, This was when Jean Mill, a Bengal breeder, visited India and found an orange domestic cat in a zoo’s rhinoceros compound. The zookeepers caught the cat and gave it to Jean. The cat was named Millwood Toby of Delhi and would introduce the rufous polygene to the Mau breed. This gene would lead to the development of new color varieties.

The popularity of the Egyptian Mau breed subsequently grew. By the 1990s, Egyptian Maus could be found across Europe, the United States, Canada, and Japan. 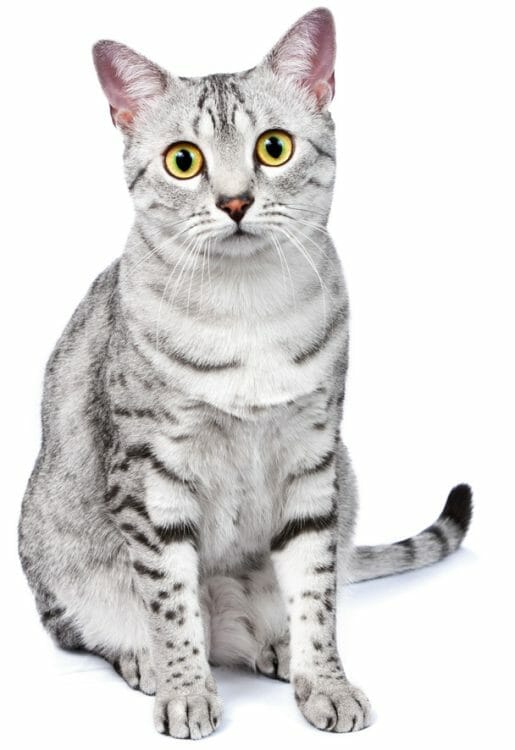 The reserved and gentle Egyptian Mau may be wary of strangers but always creates a strong bond with its owner. This connection means that a Mau will happily seek out affection and attention from any family members it lives with.

To help the shy Egyptian Mau from becoming too anxious around people and situations it is unsure of, early socialization is vital. If an Egyptian Mau cat kitten has been handled from an early age, it will be more at ease around people throughout its later life.

A renowned athletic climber, the Egyptian Mau enjoys finding the best vantage points around the home—whether they are on top of furniture or the shoulders of its owner. This observant and intelligent feline can often learn how to open drawers and doors around the home.

Egyptian Maus are adept at communication. Whether it is a wag of the tail or a chatty chirp, it is easy to identify what mood these cats are in.

As with most intelligent animals, the Egyptian Mau requires plenty of activity to stimulate its mind. Provide this cat with puzzle toys that deliver treats as rewards, and it will minimize boredom and restlessness. 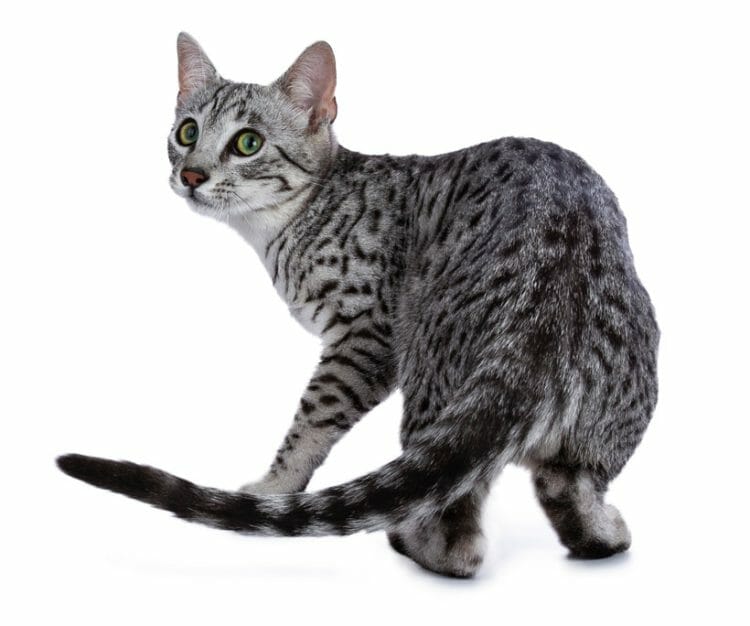 One of the most notable features of the Egyptian Mau cat is its spotted coat. In many respects, the Mau resembles the Ocicat. In addition to the famous spots, a dorsal stripe runs down its length from head to tail. The breed can come in six different color variations:

The truly athletic Egyptian Mau has longer hind legs in comparison to the front. This makes it look as though it is standing on tiptoes while it is on all four paws. These rear legs help to make them exceptional jumpers and particularly fast runners. It is said that the Egyptian Mau can run at 30 miles per hour and leap 6 feet into the air.

Distinctive markings on the cat’s oblong head will either feature the scarab or an M shape. These marks are flanked on either side by large ears that are set wide across the head. With piercing green almond-shaped eyes, the Mau is truly a captivating sight. 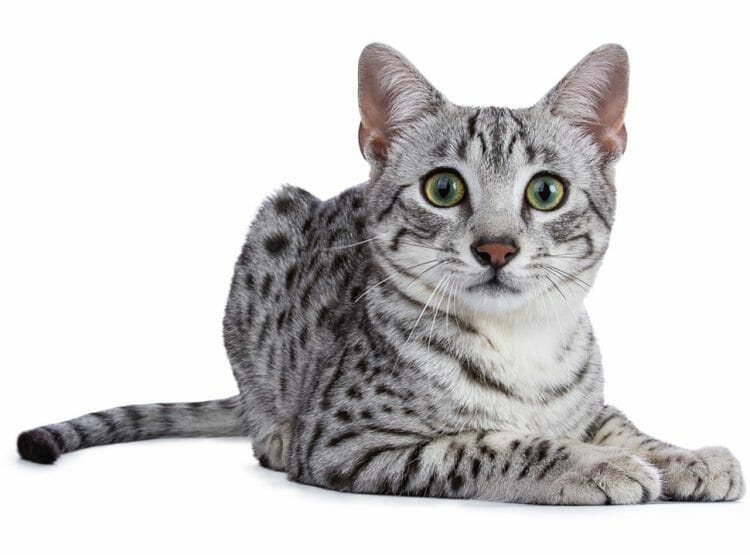 Egyptian Mau cats are typically a healthy breed with a good genetic makeup. The average lifespan ranges from 9 to 13 years. However, there are still some health concerns that owners should be aware of, such as leukodystrophy, periodontal disease, and patellar luxation. By gaining a good understanding of the conditions to which a cat is genetically predisposed, it may be possible to screen and treat early to prevent worst-case scenarios. 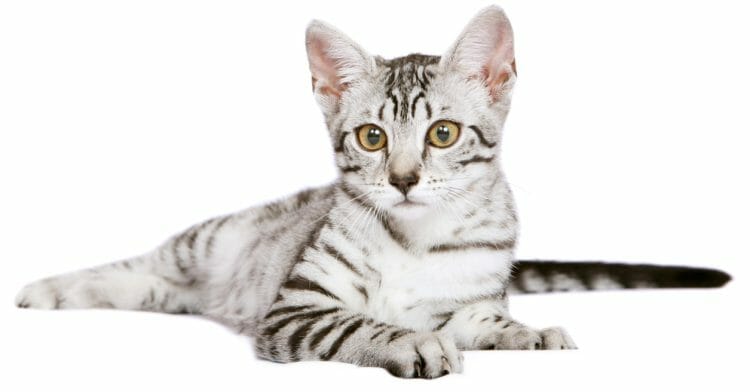 Regular check-ups and providing recommended vaccines (such as those for feline distemper and rabies) will help ensure good health. Providing preventive medication for parasites such as ticks, fleas, and heartworms will also help to keep Egyptian Maus in good health.