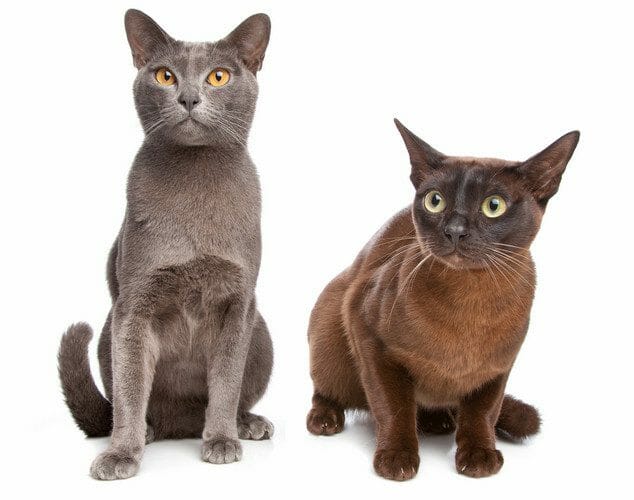 The Burmese cat temperament is described as playful, energetic, intelligent, trusting, and outgoing. These felines enjoy cuddling on a lap but also love an energetic game of fetch. Many refer to these felines as being “dog-like” as they will follow their humans from room to room. They like to be involved in all activities and expect to sleep with their humans. True to their Siamese roots, they are chatty, with a voice described as raspy, soft, and rumbling. These felines will tell their owners about their day and express their feelings and opinions.

This playful personality is not limited to Burmese kittens. The desire to play and entertain will last throughout their lives. These felines crave attention and praise for their athletic feats. They may be stubborn if they do not feel like they are being given enough attention.

Female Burmese tend to have stronger personalities than males—demanding to be the center of attention and acting as a vocal member of the household. By contrast, males tend to be more relaxed, docile, and quieter.

The Burmese are good with children and will usually tolerate a cat-friendly dog. They will do best if they have a companion to play with at home. 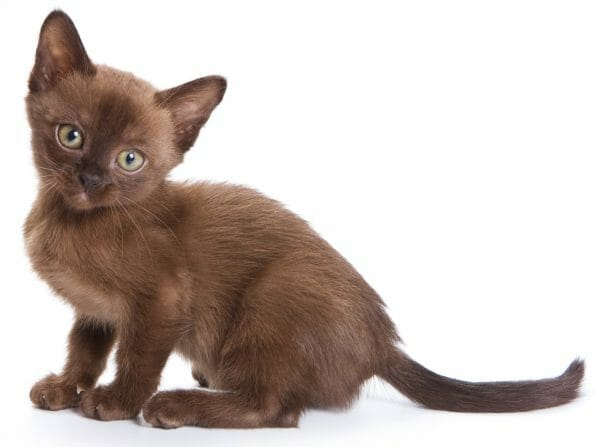 The first thing to know about this breed is that there are two distinct types: the European Burmese cat and the American Burmese cat. The primary difference relates to the shape and size of the head. However, most registries do not treat them as separate breeds.

The European Burmese cat (also called a “traditional” Burmese) is the slenderer of the two types, with a wedge-shaped head and longer muzzle, small pointy ears, and almond-shaped eyes. By contrast, the American Burmese Cat (also called a “contemporary” Burmese) is stockier with a wider head, flatter muzzle, rounder eyes, and ears that are slightly wider at the base than the European. Eye color in both is typically gold or yellow.

Regardless of type, the coat is always short and silky and in a single solid color. These felines are considered to be medium-sized cats with a muscular and sturdy build. 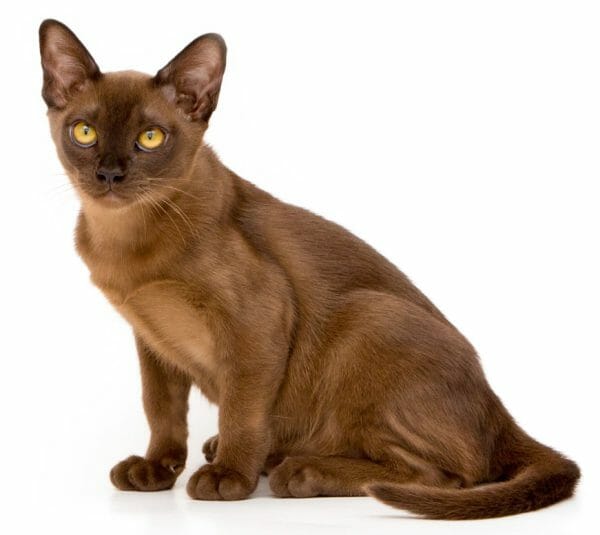 Although no feline is completely hypoallergenic, some breeds produce fewer allergens than others, including pet dander. However, at least 10% of the population is allergic to a protein called Fel d 1, which is found in cat saliva. All that being said, the Burmese is considered to be a feline that causes fewer problems with allergies than other breeds.

This breed’s coat is short and silky and comes in a range of colors, including:

Some cat associations allow for tortoiseshell, red, and cream coats, but these colors are more typical for the European type. 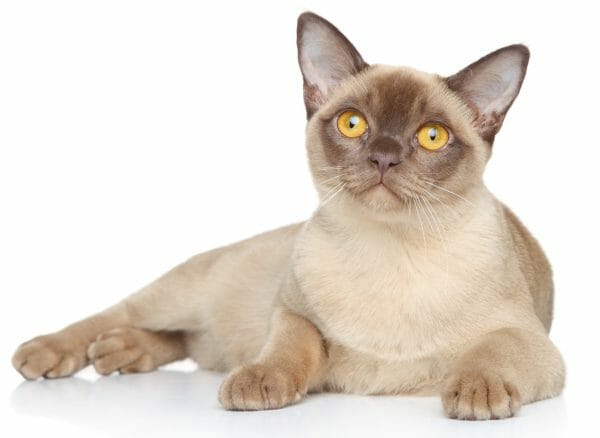 Below are some interesting facts about the Burmese cat breed. 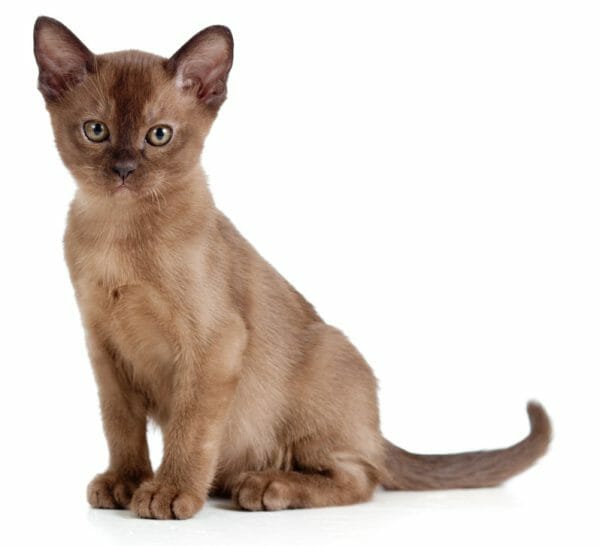 Burmese cats originated in Burma (now known as Myanmar). Known as “copper cats,” they lived in southeast Asia for centuries. It is believed the breed is mentioned in an ancient book called “The Cat-Book of Poems,” which was written sometime during the Ayutthaya period (1350-1767).

However, the modern history of the Burmese cat breed can be traced to one cat named Wong Mau. Wong Mau was brought to the United States in the 1920s or 1930s and given to Dr. Joseph Thompson—a breeder of Siamese cats. Wong Mau was described as a chocolate-colored cat. When Thompson bred Wong Mau with a seal-point Siamese, some of the kittens looked like their mother but others look like Siamese.

After breeding Wong Mau with one of her brown-colored kittens, Thompson produced more brown kittens with no points. These kittens became the foundation of the modern-day Burmese breed. Subsequent breeding produced kittens with blue, chocolate, and lilac coloring in addition to the original sable color.

In 1936, the Cat Fancier’s Association (CFA) began registering the breed but did not fully recognize the breed until 1957. This delay was due, in part, to the CFA suspending the registration of Burmese cats between 1947 and 1953 until breeders stopped crossing Burmese and Siamese felines. (It was this cross-breeding effort that led to the development of the Tonkinese cat.) 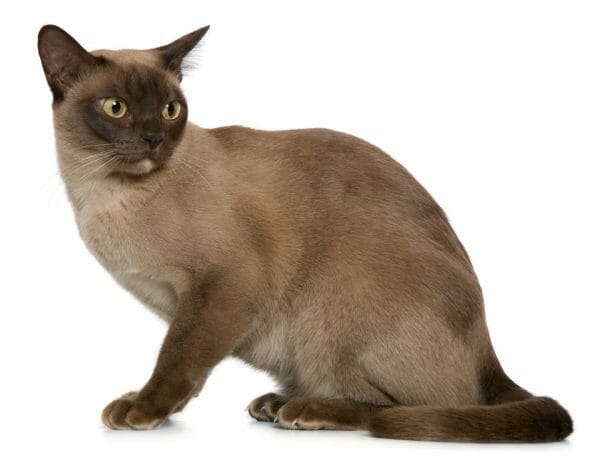 Caring for the Burmese Cat Breed

A Burmese’s silky coat does not shed much and requires only an occasional brushing. Use a soft cloth to remove any loose hair and distribute oils in the skin. Other grooming requirements include trimming the nails regularly and keeping the ears clean.

With their playful personalities, most Burmese get enough exercise through play. However, these felines love to jump and climb so a sturdy cat tree is a must. Games of fetch with a favorite toy are another favorite, as are interactive toys such as teasers and laser pointers. Their intelligence also makes them a good fit for interactive puzzle toys.

Their curious nature can sometimes lead to trouble, such as opening cabinets to see what is inside. Therefore, be sure to catproof any cupboards containing items that could be dangerous.

The Burmese cat lifespan averages 10 to 16 years. However, as with all felines, they require routine check-ups with a veterinarian and should be protected with all the recommended core vaccines, including the FIV vaccine. Owners can stave off obesity by providing high-quality cat food.

Although Burmese are generally healthy, possible health concerns include: