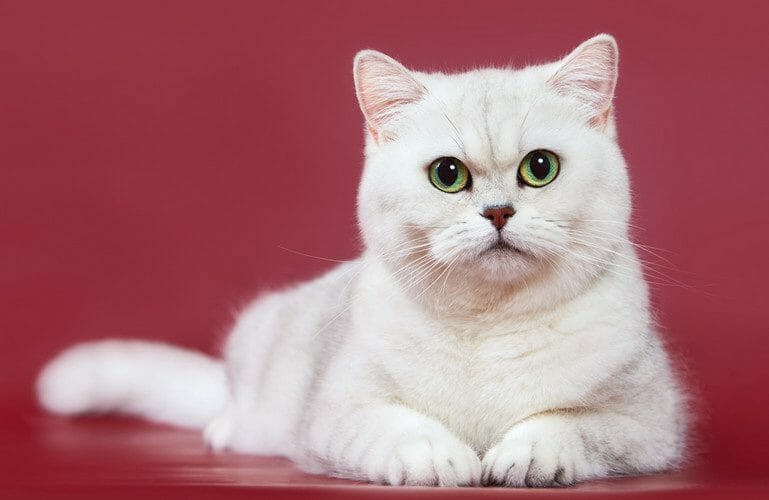 The Chinchilla cat is large with a luxurious silver-tipped white coat. This striking breed takes its name from the South African rodent, which is also known for its thick white fur with black tips. Chinchilla cats were originally developed as silver Persians. This had led many to argue that the Chinchilla cat should be a separate breed, while others say it should be classified as a Persian.

Similar in many respects to the Persian cat, the Chinchilla cat has beautiful green or blue-green eyes, softer fur, and a slightly longer nose. This larger nose reduces some of the breathing and eye tearing difficulties associated with the Persian. Renowned for their attractiveness, Persian Chinchilla cats are also very friendly. Their laid-back sweet natures make them endearing pets for families of all types. 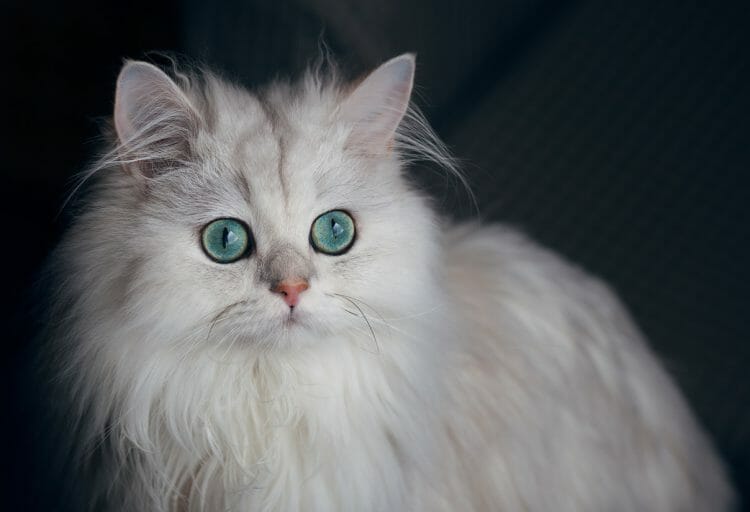 This entry into the Persian family was first developed from a silver Persian named Chinnie. Born in 1882, Chinnie was the offspring of an unknown stray tomcat and a blue Persian. Chinnie’s descendants were outcrossed and began looking like the modern Chinchilla cat around 20 years later.

In the early 1900s, the first breed standards were drawn up. Around the same time, The Chinchilla, Silver, and Smoke Cat Society was established. Since then, there has been virtually no deviation from the original breed standards for over a century.

In the United States, there have been attempts to establish a silver Persian breed called the Sterling. However, this breed was not accepted by any registries. Both the International Cat Association and the Cat Fanciers’ Association include the Chinchilla as part of the Persian breed. That said, certain associations (such as the South African Cat Council) list them separately under the name Chinchilla Longhairs.

James Bond fans will recognize the Chinchilla as being Blofeld’s famous lap cat in the 1971 movie “Diamonds are Forever.” 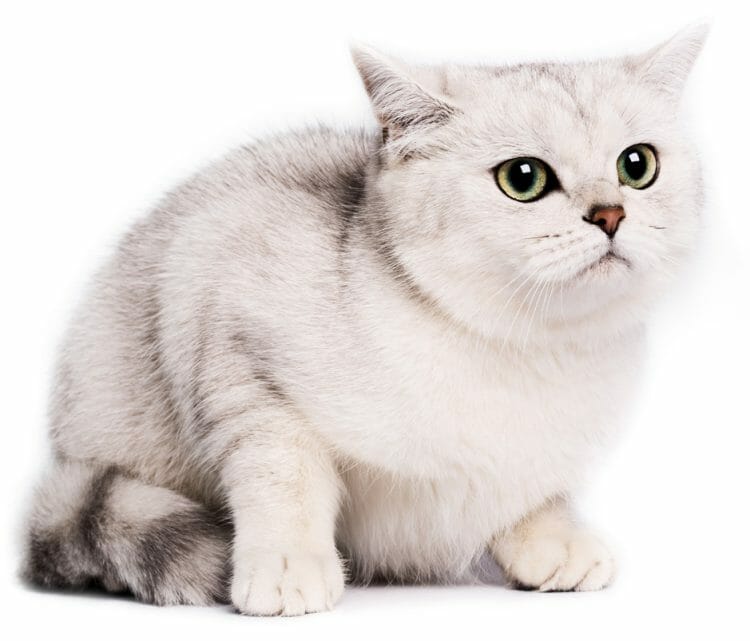 The large Chinchilla has softer features than the Persian. They have broad chests, large shoulders, and short strong legs with round paws and black pads. Their tails are proportionate in size to their bodies.

Green or blue-green eyes are highlighted with a thin line of black and dominate their soft round heads. They have small, pointed ears that prick up.

The long and luxurious fur is underlaid by a perfectly white undercoat. Each strand of the outer coat is tipped with either silver, blue, or gold.

By nature, these felines are gentle and quiet—making them suited to most families. However, they often do not tolerate children. If introducing a child to a Chinchilla, ensure that the interaction is supervised and that any petting is done on the cat’s terms.

A great lover of people, Chinchillas create lasting bonds with their owners. These indoor cats enjoy a calm home environment and thrive when there is a set routine. Much of their time will be spent sleeping or laying around the home. However, these playful felines frequently have short bursts of energy. 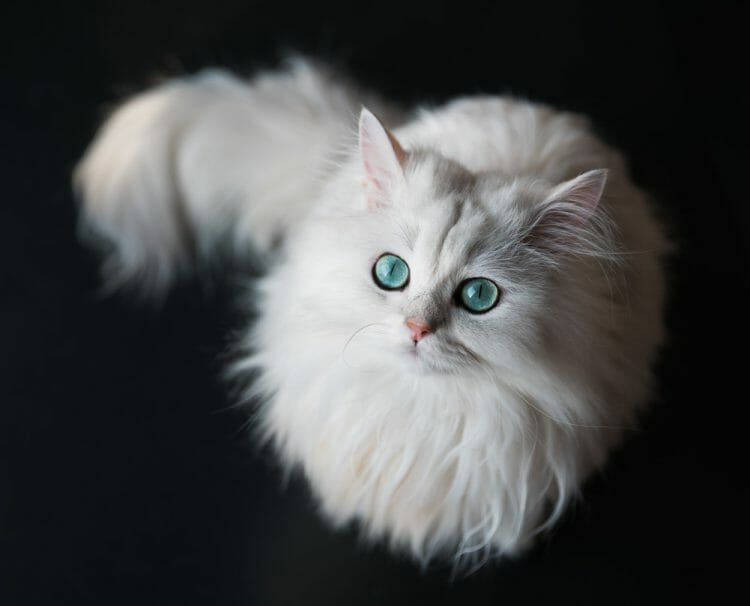 How to Care for a Chinchilla Cat

The beautiful silver Chinchilla cat requires a considerable amount of grooming to prevent mats. If the coat is not maintained, the fur may need to be clipped off. Daily brushing will ensure the coat remains healthy.

Owners should pay particular attention to the tail and underside of the cat as this area can easily become soiled with feces. If a Chinchilla’s health is deteriorating, it may not be able to groom itself properly. As a result, its coat may become greasy. This is a sign to take it for a veterinary checkup.

Although to a lesser extent than other Persians, the eyes of the Chinchilla may run. Owners should regularly wipe the corners of the eyes using a separate area of a damp cloth for each eye.

Grooming Chinchilla cats should also include clipping claws and cleaning inside the ears and around the nose.

Due to their flat faces, Chinchilla cats are prone to dental disease, which could cause eating problems. Regular cat teeth cleaning can reduce the risk of tooth decay and periodontal disease. 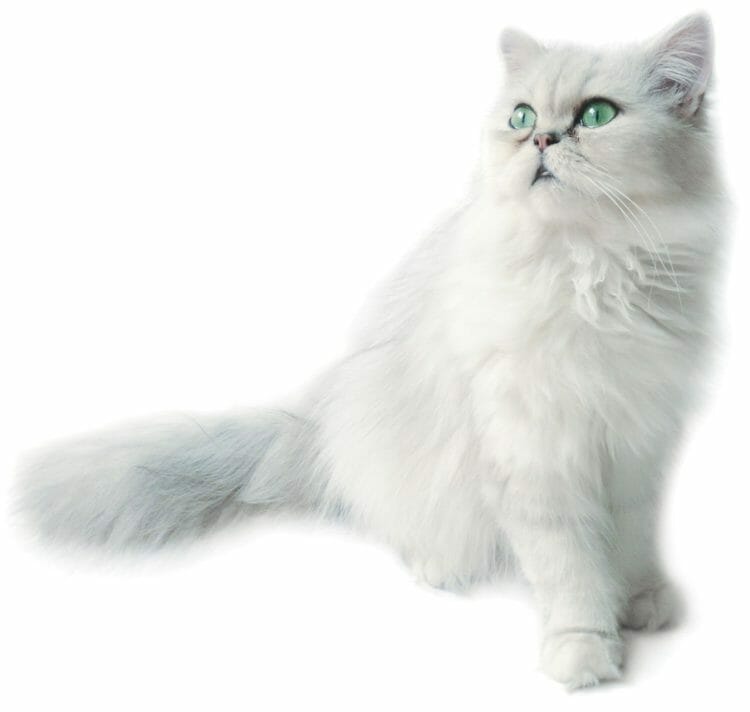 Average Lifespan of a Chinchilla Cat

On average, a Chinchilla can be expected to live for between 12 and 15 years. The following steps can help to ensure these felines enjoy a long, healthy life.

Although generally healthy, Chinchilla cats should be monitored for several common issues that are known to affect the breed, including polycystic kidney disease, blocked tear ducts, and issues associated with the shape of their heads.

Polycystic kidney disease (PKD) is a genetic condition that may affect this breed. PKD can show from a young age and causes cysts to form on the kidneys. This prevents the kidneys from functioning properly and can lead to chronic renal failure if undetected and untreated.

Signs of polycystic kidney disease include:

A veterinarian will carry out an ultrasound to identify the condition and treatment could involve a combination of medication, a controlled diet, and hormone therapy. 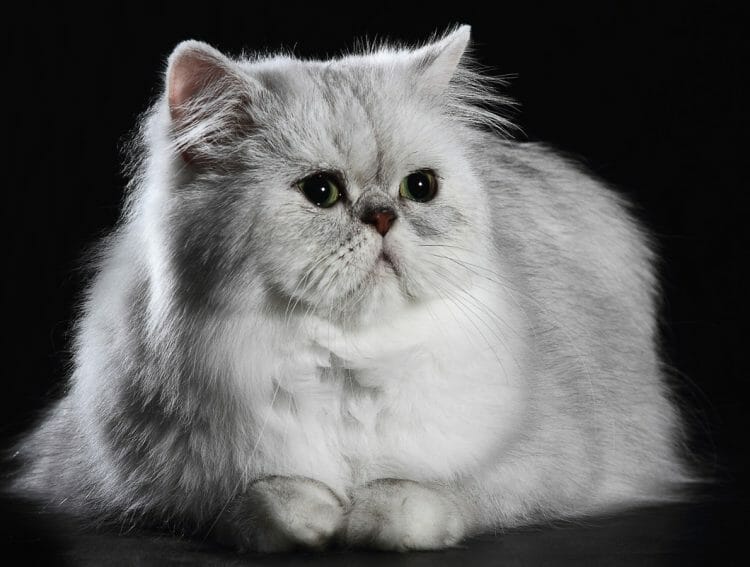 Blocked tear ducts can be an issue for all types of Persian cats. The tear ducts are situated in the corners of the eyes. When they become blocked, the eyes start to run and become watery. The liquid produced often looks dark and may stain the facial fur. Regular cleaning around the eyes will ensure they do not become inflamed, irritated, or develop sores and ulcers.

Brachycephaly. Persian Chinchilla cats are brachycephalic, which means they have short, flat faces that affect the shape of the skull. This can lead to significant health issues, such as:

Because of breathing difficulties, Chinchilla cats are prone to overheating. Owners should always ensure there is a good supply of fresh drinking water.

Finding a Chinchilla Cat for Sale

Before searching for Persian Chinchilla cat breeders to buy from, always consider adoption. Although both popular and rare, this breed does occasionally find its way into rescue centers. Often, this is because owners underestimate the level of commitment involved in caring for these animals. When looking for a Chinchilla cat adoption center, always use a no-kill shelter. Organizations such as these will never put a healthy cat down.